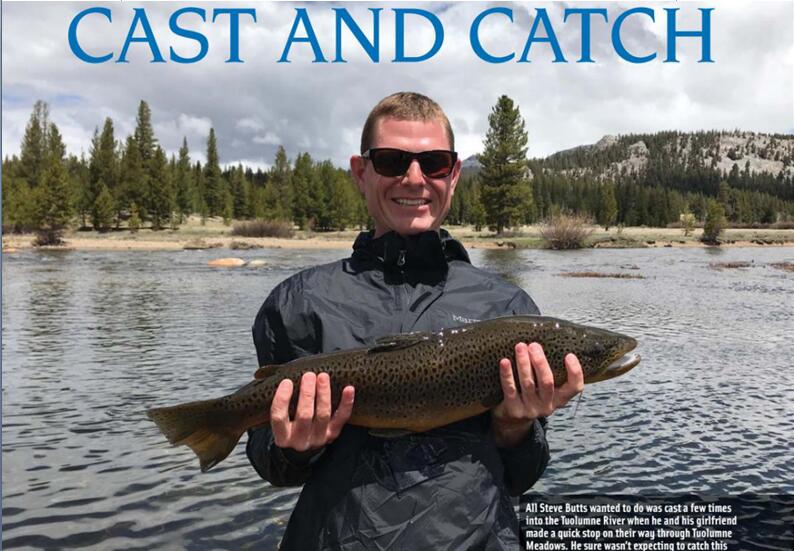 What was supposed to be a quick break to stretch the legs and walk the dog on a trip from Yosemite Valley to Mammoth Lakes ended up yielding a possible fish of a lifetime for an angler from Chico.
Steve Butts was traveling with his girlfriend Layla Yaganeh and their dog when they decided to stop in Tuolumne Meadows to break up the drive. As anglers tend to do in such situations, he couldn’t help but make a few casts into the Tuolumne River.
“My original plan was to spend a couple of hours in Tuolumne Meadows with my girlfriend and dog, but it was cut down to a quick stop,” Butts said. “We had only 15 minutes or so, so we got out. Of course I walked straight to the river with my girlfriend and dog close behind. I threw out my Sierra Slammer a few times and saw a couple small fish follow it back, and I felt automatic pressure from my girlfriend because we were technically supposed to be walking the dog.
Taking it down to the itty bitties, Butts was using a Sierra Slammers 2-inch pearl Mini Swim on a 1/16-ounce jig head and deploying it with a 5-foot ultralight rod and 2-pound line.
He called out that obligatory “last cast” into a shallow, flooded-grass area when he connected with a fish that, generally speaking, had no business hanging out in this area.
“I reeled fast until it reached a drop off, and that’s where I slowed it down and let it drop a little deeper, nd it got hit right away,” he said. “I was in shock when I saw its dorsal fin, and all I could think of was how everything I read about the area said that 12-inch fish were about the max size. I saw it was a huge suckerfish, but as it came close I got a real look at it, and my original plan to release it without a net changed.”
Getting Wet 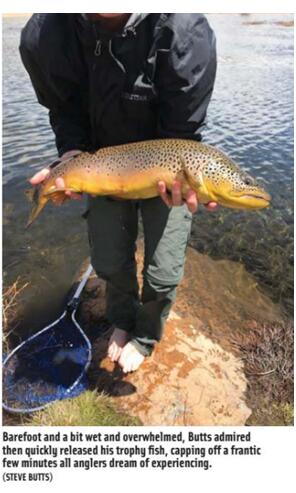 Butts pleaded for his girlfriend to run and get the net, and by the time she returned with it, he had taken off his shoes and socks and emptied his pockets in preparation to jump into the drink. The tanker German brown had freight-trained upstream into another shallow area and got wrapped up into some grass. The spot was sketchy if not dangerous - it’s where three channels of
The Tuolumne dump into one deep hole. The fish untangled just before he went in after it.
Butts fought the fish for “ a few more minutes” before it came to the net. Not wanting to injure the fish, he didn’t want to measure it but taped it out at 30 inches long with an 18-inch girth before releasing it back into the Tuolumne.
Layla took video of the scuffle, which resulted in some incredible stats in the form of a timeline detailing the ordeal from start to finish. Butts said he arrived at 11:47 a.m. He was fishing by 11:50, hooked up at 11:53, had it in the net at 12:02 p.m. and released it in a minute later. Talk about efficient use of limited fishing time!
“That was my first time fishing in Tuolumne Meadows,” said Butts. “I now feel like I deserve many days of being skunked in Tuolumne Meadows just to make up for the fish of a lifetime I was very fortunate to catch. I am going back to get a more realistic view of the area and of course. I’m going to see if I can catch that big brown again!”
OUR SNS LINKS
Copyright © 2018 FISH PABY, All Rights Reserved. sitemap