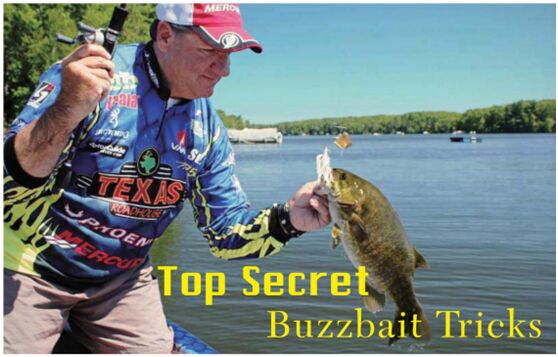 Buzzbaits are the most special kind among the baits, they could be saw, heard, and felt by when they are buzzing, and human being can detect the slightest action and so can fish. As more and more people start to try buzzbaits, I would like to share with you the trick of them.

Perhaps you could never see a guy winning the Bassmaster Tournament with the backing of buzzbaits for four days. But one thing to be mentioned is: this whisk-alike stuff is frequently used by masters.

“Many anglers forget the buzzbait and tungste weight when they angle on holiday, which is very foolish. A buzzbait can lure fish out of their hiding place.” The three time winner of Bassmaster, Kevin Vandam holds it firmly.

Gary Craine shares the same opinion; buzzbaits are always his favorite no matter in salt water or fresh water. “If you want to locate the bass in fresh water, the buzzbait would be the top choice.” He gives a further explanation,“ When I angle at a new place, I will swiftly cast my rod for so many times until I have a bite. Buzzbaits are not the only kind that I use for tournament, however, they are the most importantly in searching for fish.”

An amateur would use them probably because they add fun and joy to their angling. The intense stimulation made by the buzzbaits absolutely attracts fishes’ attention, no matter large-mouth bass or small-mouth bass. “To examine a bait is or not attractive depends on four factors, and the buzzbait takes up three of them. Angling expert Rolland said, “It could be saw, heard and felt when it’s buzzing and vibrating. The only deficiency is smell. It meets every condition of on the hook.

Below are experiences of using buzzbats shared by masters, I hope them would help you a lot.

Tip No.1 Shifting Speed on Winding Your Line
Rolland points out that most of angler would fall into a common error of abandoning buzzbaits if they tried for several times without gaining anything.
“You have to keep on finding out the best speed of controlling it, changing the speed would be a good way to attract fish school, during which you could not only change the sound and vibration but also get the visual effect.” As long as Rolland has something on hook, he will detect and record the speed, and then swings the blades to alter the curve of them; in this way can he experience different speed and sound. Extended curve can be achieved by more slowly hauling the line. If you need to speed up the action of buzzbaits, just open the buzzbait a little bit more.

Tip No.2 Angling at Night
Jerald Send is from Alabama, he used to angle in Smith Lake anglers fishing at night with buzzbaits before being a professional angler.
“All the features of buzzbaits as you can see are the angler’s outcome of experience when they angle by Smith Lake at night.” Jerald add it.
He thinks that compared with other baits, buzzbaits are less used, but they truly help you catch big fish. Basses are less alert and vigilant at night; they might swim to bite your bait from a long distance.
“One good of angling with buzzbaits at night is: you don’t have to fish in the same area as you are at daylight. You only need to fish by the shoal area in which you will catch a bass when it’s haunting.”
Swender says,” If there are fishes in somewhere, they must be swimming low in the darkness” One way to ameliorate the situation is by bending the steel wire that links jig head and blade together to 90 degrees. “It would make your buzzbait dive deeper and thus a fish is more likely on hook.”

Tip No.3 No Limited to the Season
Chris Jordan points out that buzzbaits are thought to be used in summer only, which is ridiculous.
“Most people think that fishes are hiding in deep area when it is around 46 degrees in spring and autumn. However, I have ever caught giants!” Jordan says that Bass feeds in shallow water in the afternoon of warm spring and late autumn. If they swim to there even in the circumstance that the temperature is very low, that means they are about to tuck away a big meal.”
“It was in spring, my friend Bruce Rogers caught a super big fish in spawning season and it weighed 13 pounds!” Jordan says, “Most of them don’t think it’s a good time to use buzzbaits, actually it is! What’s more, it would be an extra option while you are limited to use spinnerbait.” Jordan suggests anglers rolling back fishing line in very low speed, thus it will form a regular action of bait on the water.