On March, my friend told me that there will be amount of yellow tail fishes in Malaysia, it is something of yellow tail fish season. His speech aroused strong interest in me, because I like this kind of fish very much either on its size, shape or strength. Yellow tail fish and yellow fin tuna are my favorites. Since yellow tail fish has always been the target fish for jigging fishing, so the best option for hunting it would be jigging style.

Withstand Extremes of Weather and Arrived in Kota Kinabalu
I left over Shantou and took a flight from Shenzhen to Kota Kinabalu in July 21st. Unfortunately, at that time, a typhoon was sweeping across China, which brought much difficulties to our trip, I had no idea whether the flight will take off on time and was very afraid of missing the ship to Kota Kinabalu due to its delay, there’s nothing I can do except waiting anxiously and nervously. Luckily, after arriving in Shenzhen airport, the plane took off and landed without difficulty. My friend has been waiting there already.
At the sight of my friend, I felt much comfort though this land was very strange to me (because I had not been to anywhere in Singapore except Kuala Lumpur). He led us to a fishing tackle store to equip ourselves ( I bought some baits and Tungsten Fishing Weights) then checked in hotel, took a rest for a while.
My friend informed me to gather in the hall at 6 P.M and met with another Chinese angler in Malaysia. After that, we purchased some daily supplies and foods that we may need in the following days. Time flew beyond our expectation, as the night has fallen, we went back to hotel to build up strength and store up energy for the next day. 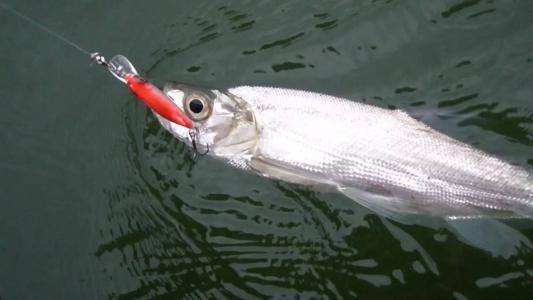 Ride the Wind and Wave, We Conquered Them All
In July 22nd, we set out on a ship named Sea Star, which is one of the best fishing boat. There were three in total, and we took the first one. It was such great pleasure to have its captain accompanied us, I was quietly looking for the outcome of our hunting.
Probably due to the influence of typhoon, Sea Star has been sailing for 4 hours. The ship rolled on a swell. Finally, we made ourselves to the destination, it was our first fishing place for the trip. Captain said that it was a good place for fishing damsel-fish, you could try jigging and angling in the bottom as well. Now that it was the stop for reserve of food, we shall catch them as more as possible, so that we could replenish and restore ourselves.
Act without delay, we went into battle. No sooner had I swung our lines, I felt fish on the hook, and it had such great strength that took me for a while to throw it out. Holy shit! A red coat! Big giant! A good beginning is half done, everyone was inspired and motivated, enjoying themselves in the fishing. Putting up a good fight, they wield successful fruits. What’s more, there were various in species, for example, golden bone, red coat, Bonita and so on.
Now that the captain has seen us wielding fruits, he suggested us turning to a next stop, getting closer to yellow tailed fishes. Though there was no moonlight and shining star on the sky, we chatted away with laughter and chuckles and shared with each other funny moments of the past. Someone didn’t want to spend hours in sitting and waiting, so they began to swing their lines. Still some felt sleepy, so they just went to bed early. To me, staying on boat was like having a vocation, which was my favorite way to angle. What ‘smore, I could know more fishing fanciers at various fishing places, talking about all kinds of fishing methods and the invaluable memories of fishing life.
The boat kept sailing, lining out strips of white waves. Winds blowing by our ears. I looked far into the distance, the sea and the sky merged into one by the horizon. Considering that it was still far away from the next destination point, I went back to my room and store up my energy for the next journey.

Sailing Long Way to Meet the Aim
When the boat was anchored again, it was already 2 P.M. Then we were arrived in another fishing spot. Captain advised us swinging rods here. As soon as I heard of these two words, I cheered up right away. I laid down my 180g jig, it was pink color. Several rounds later, I received no answer, thus, I kept wiggling the bait. Suddenly, there came a big bite, its great strength shocked me, I could feel it writhing around wildly, trying to get free.
OUR SNS LINKS
Copyright © 2018 FISH PABY, All Rights Reserved. sitemap