Last time we have discussed the target fish,special environment,equipment,method of throwing and reel of Sea fishing.We know that Sea fishing also requires tungsten fishing sinkers or Tungsten Fishing Weights.The tungsten fishing weight play a important role in Sea fishing.
Also I promise you that I will finish the rest of the Sea fishing.Let's go. 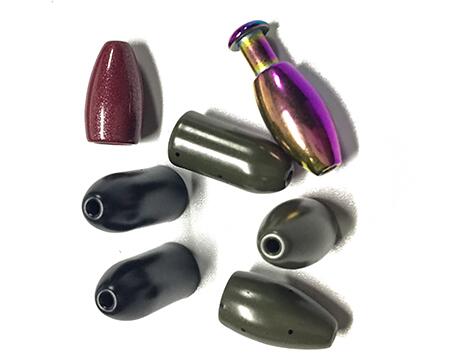 1.How to choose a marine fishing position?
When choosing a fishing spot for sea fishing, we should consider that the natural environment of the ocean is more complicated than fresh water.Therefore, there are many factors to consider when choosing a fishing position. Here are a few general principles.First, avoid choosing a shoal. Because there is plenty of sunshine on the shoals, most fish are protected from light and are usually only active in the shoal at night and in the morning and evening.Second, fishing in the bay should be like river estuaries, piers and other places. Because these places have more mud or sand on the bottom of the water, the water flow is slow, the bait is rich, and there are more fish.Third, fishing on the reef should be selected to face the impact of the waves. The waves bring a wealth of plankton, and when they collide with the rocks, they produce a lot of oxygen, so the reef facing the waves is the ideal fishing spot.

2.What are the ways of boat fishing in ocean?
If there are fishing grounds such as artificial fisheries, seaweed areas or reef groups in the offshore area, anglers can ship to these places and anchor the ship for fixed-point fishing. The fixed-point fishing adopts the general fishing method, and the objects are mainly offshore fish, such as grouper, sea bream, squid, octopus and so on.
The other is that the angler is on the boat, letting the boat float with the waves, the bait and the hooks also swim in the water, attracting the fish to bite.The main objects are octopus, sea bream and so on.This method eliminates the need for a fishing rod and requires only a wooden reel.Fishing baits generally use live baits, such as small fish, shrimp, and so on.Tow fishing is suitable for large fish that swim fast, such as sharks, tuna, squid, swordfish, etc.Tow fishing requires a high speed speedboat to carry the angler and the electric reel as an auxiliary tool.When the speedboat is moving at a high speed, the angler holds the fishing rod, drags the special fishing group, thick line, etc., so it is called tow fishing.

3.How to catch live shrimp as a bait?
Live shrimp is the most commonly seawater bait in Sae fishing. They have small body, strong life, easy to collect and preserve. They are the favorite foods of many kinds of fish, especially the valuable fish. The live shrimps often used as bait include porcupine shrimp, sand prawn, sand shrimp, white shrimp, etc., and the size of the individual is preferably within 10 cm. Shrimp is distributed on the coastal shoal, which is easy to collect and capture. When collecting live shrimp, you should prepare a shrimp net and set it on the coast, and sprinkle leftovers and rotten meat slag as bait, so that more live shrimp can be netted at one time.
The method of preserving live shrimp is also relatively simple. Look for a larger container, put a layer of fine sand 2 cm -5 cm on the bottom of the container, add clean sea water and shrimp, and then put a fine sand cloth on the mouth of the container. It should be noted that the seawater should be able to just pass the back of the shrimp. The gauze at the mouth of the container needs to have small holes to facilitate the breathing of the shrimp while preventing it from jumping out. The water should be changed twice a day.

4.How do tides and sea breeze affect sea fishing?
A.Tidal waves have a greater impact on sea fishing. During high tides and low tides, seawater is in motion, and sea fish will also feed for movement. Therefore, high tide and low tide are the best time for sea fishing. Especially during the high tide period. The chance of a fish biting a hook can be increased by several times
B. The impact of sea fishing during sea breeze is second only to tidal waves. Wind is better than no wind. When there is wind, the wind stirs the tide and increases the frequency of sea fish foraging. The level of the wind is good at the third and fourth grades. After a few days of strong winds, it is a good time for sea fishing. Because the sea fish has not eaten in the wind for several days, the sea breeze is particularly hungry after calming down, and the fishing rate is doubled. improve.
For the wind direction, under the premise that the wind is not large, the wind blowing from the ocean to the land better than the wind blowing from the land to the ocean.But when the wind is too strong, it not only affects the hook, but also have a large piece of seaweed blows to the shore.In this case, if you add a 2oz tungsten fishing weight of FishPaby to your main line, you will find that the feeling of sea fishing is really great!
It’s just about the end of the sea fishing. If you agree with the FishPaby’s views and want to try our tungsten fishing weight or tungsten fishing sinker even the tungsten ice jigs. Just contact us on Facebook,Linked In,Instagram or Youtube.
See you~