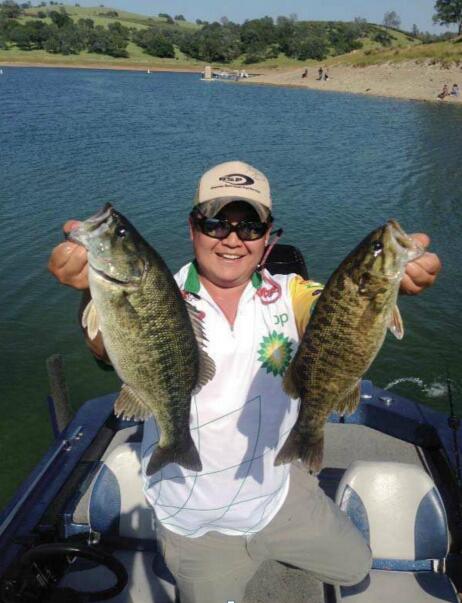 Mark pressed feed-forward control and drove forward. I used Tenebrio molitor instead. Out of sudden, the rod tip stopped downward for one second. I pulled up my rod and stabbed that fish, then dug the gills. It was a nice largemouth bass. Mark helped me scooping the fish up, it weighed about two and a half pounds. Cheerfully, we gave each other a high five, he seemed happier than I was, kept crying,” Good job bro!” I hang another Tenebrio molitor and swang the rod to the same place. No sooner had it sunk to the bottom I felt an action on my bait. When I was hesitated at that time, a strong and fierce bite caught my attention, I lifted the reel at instance, got it! However, that thing came from the water was so strong and desperately swimming downward. Hence, the reel spinning swiftly, clicking and clanging, I witnessed the line in the reel got thinner and thinner. I shouted,” Big one! big one!” Mark took a net and grinned, “Don’t worry about it, it’s a smallmouth.” As expected, it was a smallmouth bass indeed, which weighed no more than 2 pounds. I was so excited because it was the first smallmouth that I had ever caught! A moment that could be written to my history! Mark took a picture for me, then he placed it in a live fish hold box. Mark, the excited boy gasped the news, if I still maintain the catch rate, I may very likely win the competition. In the following hour, he also had a bite.

As it was getting light, the number of fish decreased obviously. We drove the kayak to a branch. I searched every hole and corner of the stone area and caught another smallmouth. Gradually I could see the condition underneath the water very clearly. There were many huge stones and I changed to a shad bait which was about 3 meters long. I swang my rod to the huge stones. Paused for a while, the bait was attacked. Thanks to the straight rod that I used for this time, a smallmouth bit my bait again! Later, we drove to the shore facing the wind when it was windy. Without hesitation, I swang the rod that was binded with spinner bait to the shore, within three times, the rod was pulled by a certain strength, a smallmouth bass that weighed totally three and a half pounds was on hook. Seeing this big fish, Mark jumped for joy and said I shall win. Afterward, I got a largemouth bass that weighed 2 pounds with the help of downshot jig. It was 12 a.m., 3 hours left for the competition, but I had already met the standard and replaced the smallest smallmouth bass.

In the following game, Mark demonstrated his power and skill completely. He used downshot rig, jig and Carolina rig, respectively. (Perhaps I could try Tungsten Fishing Weights such as Tungsten Flipping Weights, soft tungsten putty or Tungsten Worm Weights next time. They are environment-friendly, wind-resistant and will probably increase the catch rate) I, on the other hand, waited and waited, my fishing rod stood still. I kept switching between spinner bait and shad bait for searching, and it suddenly stopped in stone area. Therefore, I took an advantage of this opportunity and lifted the rod, it got extraordinary strength, I looked through the clear water and saw a giant on the hook. At that urgent moment, it fled way. American hook was a kind of thick while the rod was soft, the discharge device was loose so that barb didn’t make it through the fish. That’s why the fish off the hook. Though I was desperate, I put the bait on my rod. The cast distance was limited, but less fish ran away at least. Never had I expected that there was no bite anymore, Mark also lost a fish. The end of the game was drawing near, and we drove our boat to the wharf.

To be Continued
We drew the kayak to the shore and was about to weigh the fish. Quite a few people had caught the fish that was more than 4 pounds, I thought I may not have the luck to win. At last, it turned out that my total weight was up to 10.24 pounds, I wouldn’t know I rank third all (at the mixed ranking of with-boat groups and without-boat groups) and rank first at the without-boat groups. Though I have neither integral nor bonus because I was not a full member, having achieved such grades also cheered me up.
I posted these photos on WeChat, Aqiu commended,” Acturally you don’t need to ask me how to catch smallmouth at all… …”